Watching the music video for Tiny Dancer is the first time in the two years (holy shit) since I moved away that I’ve actually missed Los Angeles. How beautiful and perfect.

No More Parties In LA

No more parties in LA. How fucking perfect… (I actually feel this one, Kanye. Deeply.) 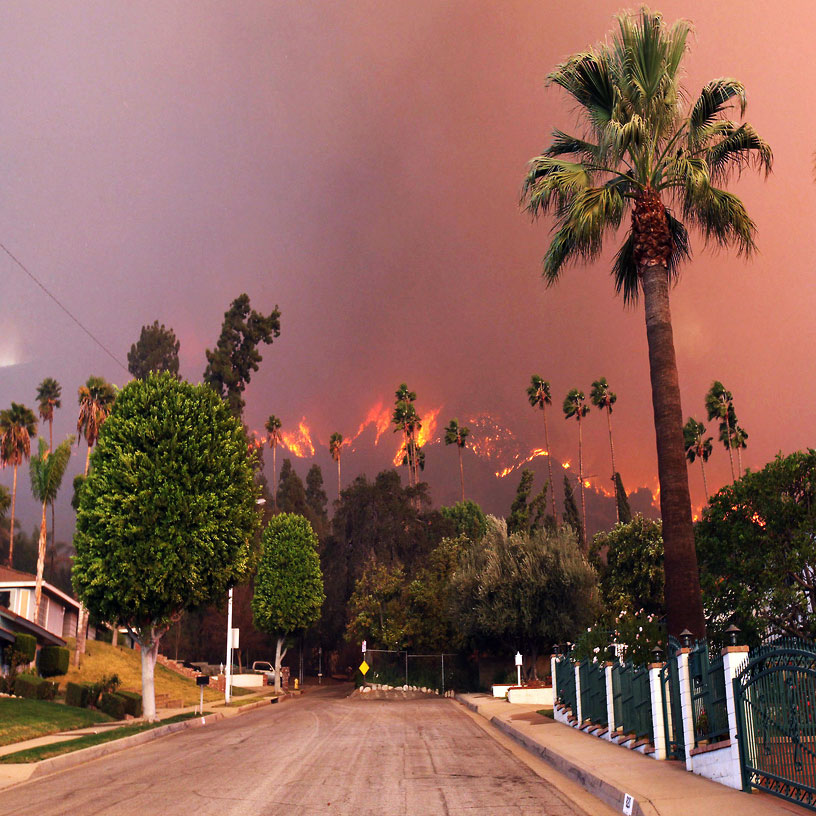 I threw together a little Heatwave Mini-Mix. Enjoy! 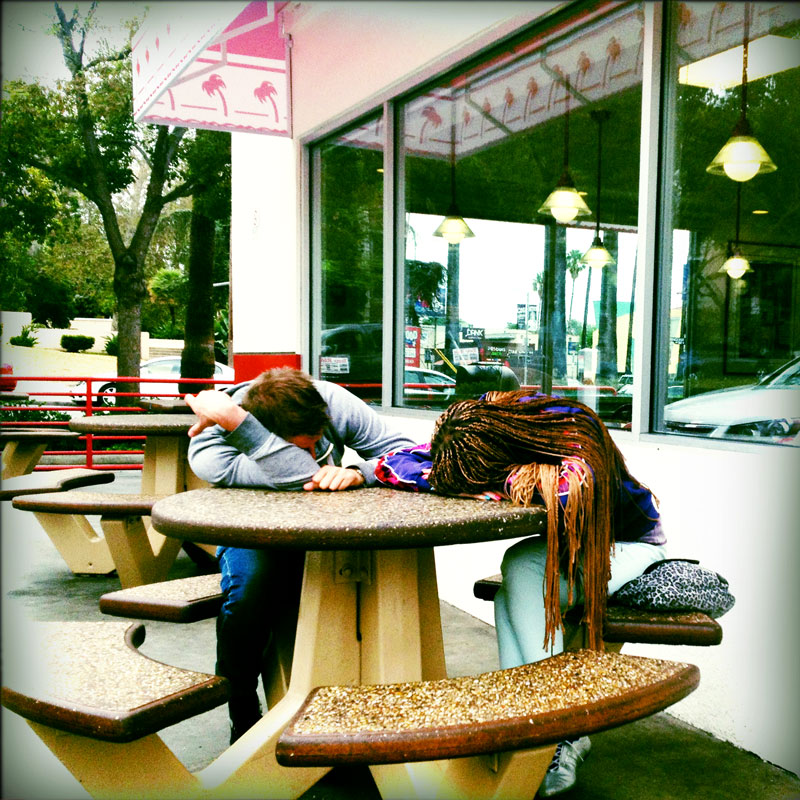 I went ahead and got In-N-Out for breakfast. This skanky yet somehow adorable little club kid couple were comatose on the benches by the door, proof that when the meth finally wears off, you sleep where you fall.

If I had to guess, I’d say our 90’s raver-era Sid and Nancy crawled out of some after-hours sewer (most likely Avalon) sometime after the sunrise, walked like zombies through Hollywood until reaching In-N-Out, only to find that it doesn’t open until 10:30 on Sundays. They promptly passed the fuck out waiting for the promise of animal style cheeseburgers, and the security guard took pity and decided not to poke them with a stick.

Pretty sure they’re still there.

I knew the evening was doomed the moment my friend extended a dinner invitation to our drug dealer. He did it without thinking. Between the cocaine and his permanent erection he had absolutely zero blood flowing to his brain, so he didn’t recognize how bad an idea it was until much later.

Of course, our drug dealer immediately accepted. There was no way he was passing up an opportunity to rub elbows on the Chateau terrace. In addition to delivering high quality party favors directly to the hotel suite, he had musical aspirations and was a bit of a social climber.

He was also the type to never show up without at least two women on his arm. This night was no exception, although to call them women would only be correct insofar as it identified their gender. These were girls, not women. In fact, they were prostitutes. More specifically, they were ratchet ass hoes. (I would never slut-shame a woman for being a sex worker, but I’ll style-shame a bitch all night long for being a tacky, gum-smacking hoodrat.)

The table for six had become a table for nine, and I’m still amazed they were able to accommodate us. Our original party included an award winning documentary filmmaker and his wife, my friend who is the head of production at a major company, his friend who is the head of security for a major celebrity, my BFF, and me. At the last minute, we added our drug dealer and two hookers.

I ended up seated next to one of them at dinner, and let me tell you, aside from her confusion about the silverware, bringing a street-walker to a fancy restaurant is nothing like the movie Pretty Woman.

At first, I thought she was a sweet kid, but after she gulped down a few glasses of Bordeaux (accented heavily by the Passionberry Twist gum still in her mouth), all hopes for an adult conversation went out the window. She talked loudly about nonsense, she gawked at celebrities, and she ordered the most expensive piece of meat off the menu for no other reason than she could.

What was supposed to be a pleasant dinner filled with sparkling repartee quickly became an exercise in biting my tongue. My BFF and I spent most of the evening communicating our mortification through sideways glances.

Still, there were several priceless moments. When the other girl reminded our drug dealer that she had to be on stage later that night, the documentary filmmaker assumed she was in a play. I’ve never seen a bushier pair of eyebrows raise higher than when she told him the name of the strip club instead of the name of a theater.

The documentary guy obviously wasn’t used to this kind of mixed company, and true to form, he started asking the hookers a series of personal interview questions that would have made Errol Morris proud. The moment that defined the evening happened when the girl next to me revealed that her earliest lesbian experience had been at age fifteen, and it had been with the middle-aged mother of her boyfriend at the time.

Every other conversation at the table immediately stopped, and all eyes went to her. Without missing a beat, she shrugged her shoulders and said, “What? It’s not like she did anything wrong. I was into it.”

I saw the documentary guy’s finger go up, and I knew in my heart he was about to explain to her the statutory nuances involved in that kind of situation, but before he could say another word, his wife kicked him in the shin so hard underneath the table that we all felt it.

By that point, it had dawned on my friend the sheer enormity of the mistake he had made, and as is customary when one no longer gives a fuck, he decided to remedy the situation by drinking heavily. The rest of us followed his lead.

By the end of the dinner, the celebrities were the ones staring at us, and that’s not a good thing. Thankfully, the staff never once batted an eye. (Those dudes have seen far worse than our little wine-soaked shit show.)

I hit my limit when the hooker sitting next to me asked for a to-go box for the rest of her steak. A fucking to-go box. At the fucking Chateau. Every fiber in my being wanted to scream, “This isn’t Applebee’s, bitch!”

I didn’t, though. It wasn’t my party. I too was just a guest. Instead, I looked over to my BFF who already knew exactly what I wanted to say.

Oof. When I think about it now, it still makes me shake my head. Then again, a doggie bag may very well have been the most perfect way to end that meal.

The End Of An Era

This breaks my fucking heart, you guys. The Power House was one of my all-time favorite dive bars in the world.

That joint was a legendary shit hole from way back in the days when nobody checked ID’s, you could still smoke in a fucking bar, and the neighborhood had some stank on it.

Even after Hollywood and Highland became the Times Square of the West Coast, the Power House still managed to stick to its low life roots, and I will definitely make it there to raise one last stiff-as-fuck well drink before the doors close forever next week.

Goodbye, Power House. You were a dirty alcoholic hooker who knew how to have a good time, and Hollywood will be that much worse without you.

If Los Angeles were depicted as nine circles of suffering, here’s a tentative list of how I would organize the damned souls in the underworld:

Second Circle (Lust):
Guys who sit in the back row at yoga classes

Sixth Circle (Heresy):
Unreliable drug dealers and friends who live in the Valley

And in the very center of Hell:
Donald Sterling, condemned for committing the ultimate sin. (For now, of course. Los Angeles has a fresh Satan every month.)

The whitest thing anyone has ever texted me. 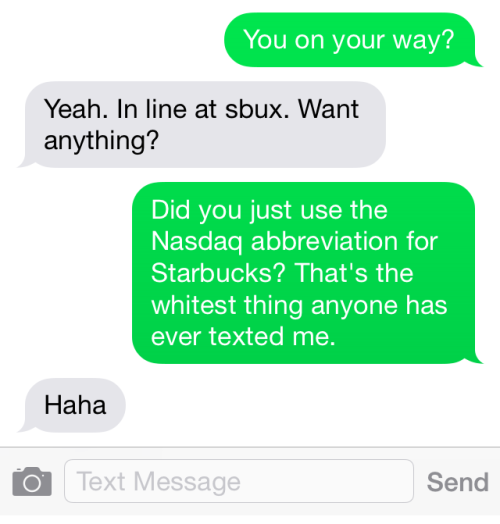 The guy I’m deciding whether to date just casually referred to Starbucks by its Nasdaq abbreviation. Those are the weird details about a dude that I notice, especially the MBA types.

He’s the first guy I’ve taken the least bit seriously since that actor fucked me sideways at the beginning of the year. I’ve had a fling or two in the interim — a three day drug bender with a crazy hot bartender, Vegas with a platonic partner-in-crime — but I can already tell this new guy isn’t just a seat filler.

He’s an executive at a toy company who — surprise — has a raging case of peter pan syndrome. That I don’t mind. I can handle a certain boyish charm as long as it’s not accompanied by emotionally crippling levels of self-involvement.

We’ll see. He comes recommended by the kind of mutual friends who know my dark side. They’ve indicated that he’s too much for most girls to handle, which of course, I interpret as a challenge.

There’s an ex-wife who’s not in the picture. No kids. He’s probably seen the inside of Passages Malibu, but that kind of shit doesn’t scare me. Best I can tell, he’s a wild man who’s managed to convince the world he has his shit together. I want that. Hell, I need that if I’m expected to hold my interest longer than a holiday weekend.

This is the sunrise I was tweeting about this morning. No filter. No retouching. Still, this pic barely does it justice.

There’s a trick to waking up in Los Angeles before the sun rises.

Take a moment to look out over the city. Center yourself on the downtown skyline shimmering in the distance, and focus on the low hum that radiates upward from the palm trees. The resonant frequency of the urban sprawl is the closest thing to silence you’ll hear for the rest of the day, and for some reason, it’s peaceful.

Los Angeles is benevolent at this hour. You feel totally alone and hyperaware of your insignificance, but it’s soothing, and in that moment before the horizon fades from black ink to blue, it’s just you and the city.

At almost any other time of day, Los Angeles stares back at you with total fucking indifference, but if you take a deep breath during one of these quiet pre-dawn moments, you can make eye contact with something out there, and it will make you feel like you belong.