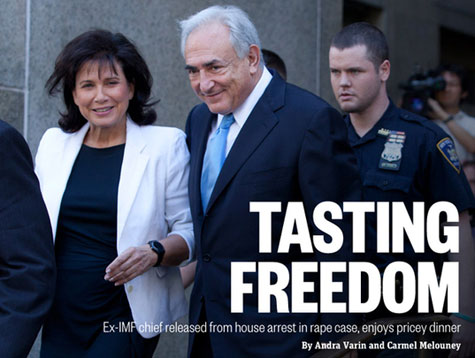 So, the African hotel maid who was sexually assaulted by the former head of the International Monetary Fund turned out not to be the blessed virgin Mary, and so now they’re gonna drop all the charges so he can go run for the presidency of France. Of course, this was to be expected.

Wealthy men have been raping the help since time immemorial. Hell, our founding fathers did it, and for Dominique Strauss-Kahn, it’s practically a resume builder that he forced a women to blow him in a luxury hotel. The French love that shit. He’s like a Dick Cheney who can still get it up.

For those of you who’ve followed this case and are now concerned with all the unflattering details that are being leaked about the victim, please don’t act surprised. This is how it’s done. Rich creepy fuckers like DSK have access to the best character assassins in the world, and trust me, they get away with shit that would make Charlie Sheen blush.

It’s easy to make fun of an American sensibility that creates bimbo presidential candidates like Sarah Palin, but it’s a much more insidious mindset that allows rapists like this any chance at being a head of state.

On Lightening The Fuck Up 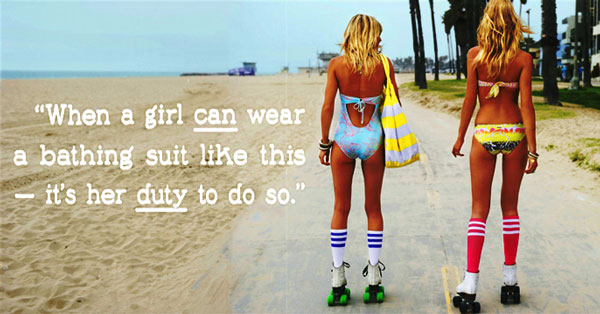 “When a girl CAN wear a bathing suit like this, it’s her DUTY to do so? Come on, now. I’m sure you’ve gotten a pretty large response from the Tumblr feminists for that one, but even I’m surprised at you. Since when is it a woman’s duty to wear anything she doesn’t want to?”

The line is an intertitle card from Cecil B DeMille’s 1920 silent comedy, Why Change Your Wife? The photograph is a Venice Beach fashion shot from the Roxy High Summer 2010 Collection. The combination of the two images is obviously a juxtaposition open to interpretation.

Perhaps it’s a commentary on a century’s worth of prescriptive modesty standards that anyone with half a brain and a sense of humor should be able to smirk at. Then again, perhaps I was just poking a stick at those who seriously consider themselves “Tumblr feminists.” Who knows? I’m a fuckin’ mystery.

Either way, I hope your question is rhetorical, because you really don’t want me to start listing the many ways it has always been and continues to be a woman’s duty to wear shit she doesn’t want to.

Keeping Romance Alive in the Age of Female Empowerment

I hate this article *so* much.

Keeping romance alive in the age of female empowerment? Are you fucking kidding me? This kind of shit drives me crazy.

However much money Katrin Bennhold was paid to write this insipid tripe, I will gladly write a check to the New York Times to unpublish it.

Better yet, how about they just hire me to write a piece detailing the counter-argument? It would be titled, “Keeping Romance Alive in the Age of the Fragile Male Ego.”

Believe me, it would be the truth you fuckers all needed to hear.

There is a growing movement of pharmacists refusing to fill women’s legally prescribed birth-control prescriptions. Some pharmacists even go so far as to lecture women, humiliate them in public, or refuse to hand back the prescription after they refuse to fill it.

No shit. This actually happened to me.

I had a broken condom incident one night at the Sundance Film Festival back in 2005. Luckily, one of my traveling companions was a doctor who immediately wrote me a script for the morning after pill.

Problem was, I was in fucking Utah surrounded by a bunch of Mormons. There was only one pharmacy in town that actually stocked the prescription, and the holy-rolling cunt at the window straight up refused to fill it.

I was standing there in an major chain pharmacy with a legitimate medical prescription being handed a scarlet letter by a bible thumping pharmacy tech. She actually used the phrase “whoring around.”

I went fucking nuclear. Words cannot describe the wrath and fury I unleashed on that sanctimonious bitch. She threatened to call the police. I’m pretty sure I threatened to burn down her church.

Ultimately, it came down to the general manager and the security guard pleading with her boss to fill the script just so I would leave.

I still get angry when I think about it.