On My State-Issued Permission Slips

When I lived in Los Angeles, I had a medical marijuana card. I carried it around with me at all times. I didn’t even smoke weed all that much. It’s just something I kept as insurance, a sort of “get out of jail free” card that was nice to have that I knew I would never really need. It also served the dual purpose of being a smirking reminder of American hypocrisy. (Honestly, that was the real reason I bothered keeping it.)

When I moved to a different state, my medical marijuana card became as useless as an unused drink ticket. It lost all its validity. In fact, it became a liability, something more likely to get me into trouble than out of it. The card was still a reminder of American hypocrisy, but it had gone from smirking to bitter.

When I removed it from my wallet, I knew I had to replace it with something else, something equally ridiculous, something that made a similar statement about how fucked up this country of ours really is.

Well, it finally came in the mail yesterday. After jumping through all the hoops and paying all the fees (just like I did to legally smoke weed in California), now in the place that I used to keep my medical marijuana card, I proudly display my very own concealed carry permit.

I don’t necessarily plan on carrying a gun around. Then again, I didn’t walk around holding weed all that much either. Taking advantage of the privileges afforded me was never really the point for either card. It’s the privilege itself that I find so amusing. I have two little pieces of plastic from two different states, each one giving me permission to do something that would be felonious in the other. How fucking insane is that?

I almost want to frame them next to one another, or better yet, glue them back-to-back to form one double-sided piece of magnificently ironic identification, my own little piece of private performance art.

Not yet, though. I paid good money for these privileges, so there’s no point in defacing my state-issued permission slips until they expire. After all, I do own a gun. Who knows? Maybe one of these days I’ll feel like walking around strapped just for shits and giggles. And hey, I’m sure I’ll be visiting LA again sometime soon. Maybe I’ll feel like stopping by my favorite dispensary on La Brea. Either way, I’d better have my card on me. Otherwise, someone might think my behavior was criminal. 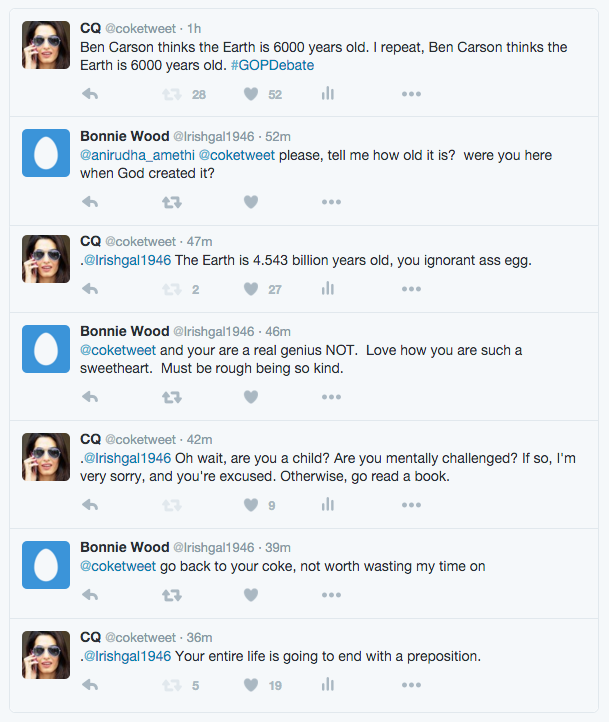 I got into a twitter spat with a Republican egg during the GOP debate, and I vowed to follow every person who got the joke about the preposition. (Those are my people.)

I talked to America about her birthday, and she doesn’t want to do anything this year.

She’s 236, which is totally one of those “in between” birthdays. Seriously, guys. It’s no big deal. 200 was the crazy one when she really went all out, and she just doesn’t feel like partying this year. We can take her out to dinner or something, but no presents. We’ll go big again when she hits 250.

Here’s the raw interview footage of those two white trash dumpster rats who robbed a Girl Scout of her cookie money in broad daylight in front of a Florida Winn Dixie.

These tacky little cunts have no guilt. They have no shame. They’re stupid, shallow, Starbucks-swilling sociopaths.

By all means, hate these two little pieces of shit. Hating them is cheap and easy and it feels good, but while we’re at it, let’s also take a hot minute and recognize ourselves.

This is our culture. This is who we are, and not even at our worst. These girls are perfectly average. They had an average public education in an average middle class neighborhood in an average city. They are average American teenage girls in every way.

That’s the most wonderful and horrifying thing about this video. It’s inescapable fucking poetry about the American experience filled with Girl Scouts and what they can grow up to become. It really is our culture. It really is who we are.

Osama Bin Laden is dead. That is all.

What the fuck, Mississippi?

Seriously, what the fuck?

A school district, presumably run by adults, throws a temper tantrum because a lesbian wanted to wear a tuxedo to prom? Wow. I am so glad I don’t live in that ignorant-ass, redneck part of the world anymore.

Here’s the backstory: a lesbian girl named Constance McMillan wants to go to prom with her girlfriend and wear a tuxedo instead of a prom dress. A bunch of backwoods Mississippi school officials heads explode, so the ACLU steps in to remind the headless officials of the definition of free expression.

Instead of begrudgingly advancing the cause of civil rights to a level the rest of the country reached in the late 1970s, the infantile school administrators cancel the entire senior prom, essentially playing a district-wide game of nanny-nanny-boo-boo.

Really, Mississippi? Really?Wouldn’t you like for just once to be on the right side of an argument about civil liberties? Did you learn nothing from the sixties?

And Constance McMillan? You are cordially invited to Los Angeles. Not only will I personally have you fitted for a tux, but I will buy you a top hat and a motherfucking cane.

Every night is prom night out here, babe.

(Oh, and by the time you’re ready to get married I promise California will have its shit together on that too.)

There is a growing movement of pharmacists refusing to fill women’s legally prescribed birth-control prescriptions. Some pharmacists even go so far as to lecture women, humiliate them in public, or refuse to hand back the prescription after they refuse to fill it.

No shit. This actually happened to me.

I had a broken condom incident one night at the Sundance Film Festival back in 2005. Luckily, one of my traveling companions was a doctor who immediately wrote me a script for the morning after pill.

Problem was, I was in fucking Utah surrounded by a bunch of Mormons. There was only one pharmacy in town that actually stocked the prescription, and the holy-rolling cunt at the window straight up refused to fill it.

I was standing there in an major chain pharmacy with a legitimate medical prescription being handed a scarlet letter by a bible thumping pharmacy tech. She actually used the phrase “whoring around.”

I went fucking nuclear. Words cannot describe the wrath and fury I unleashed on that sanctimonious bitch. She threatened to call the police. I’m pretty sure I threatened to burn down her church.

Ultimately, it came down to the general manager and the security guard pleading with her boss to fill the script just so I would leave.

I still get angry when I think about it.

Simply Sara is a YouTube based cooking show featuring a morbidly obese housewife from the blue collar south who prepares unhealthy and unsophisticated food from the kinds of recipes one finds on the side of soup cans.

It’s all very grotesque and somehow voyeuristic. The whole affair is filmed with the clumsy and overzealous camerawork of a husband getting a devilish thrill by watching his wife do something naughty.

It really does feel like you’re watching a homemade sex tape. In a sense, you are.

They aren’t having sex on camera (thank god), but these cooking videos are most definitely an expression of two people making love in their own fetishistic way.

I think that’s why I like it so much, because they are so very real.

If these clips were the concocted work of an avant-garde filmmaker, they would win festival awards and be considered brilliant commentary on the gluttony of Ugly Americans.

But no. There’s no double meaning. There’s no symbolism. There’s not the slightest trace of irony in the elevator music or the random cutaways to the house cat.