How To Be A Gentleman

1. You should put on the best version of yourself when you go out in the world because that is a show of respect to the other people around you.

3. Manners are very important and actually knowing when things are appropriate. I always open doors for women, I carry their coat, I make sure that they’re walking on the inside of the street. Stand up when people arrive at and leave the dinner table.

4. Don’t be pretentious or racist or sexist or judge people by their background.

Listen up, fellas. Tom Ford is giving away pure gold here. There’s nothing better than a gentleman. Number three is important. Mind you, it’s not about chivalry. It’s not about courtship and gender roles. Tom Ford is heartbreakingly gay. He’s not trying to fuck me, but he still knows how to treat me. He still has manners. It’s a distinction that I appreciate. Fuck chivalry. Be a gentleman.

I called bankcard services this morning and spoke to a condescending robot that kept insisting my call was important.

Don’t lie to me, robot. Don’t thank me for my patience in that voice that sounds exactly like my mother when she talks to a waitress. Just play some shitty hold music while I wait for a live human to churn through my private financial records to discover why yet another one of your robot friends has insisted that the activity on my account is fraudulent.

Yes, I buy five dollars worth of gas at a time. Yes, I make large purchases in jewelry stores immediately afterwards. This is how I live my life, robot. I don’t need you judging me. I don’t need you questioning my choices.

You may sound like her, but you are not my mother. 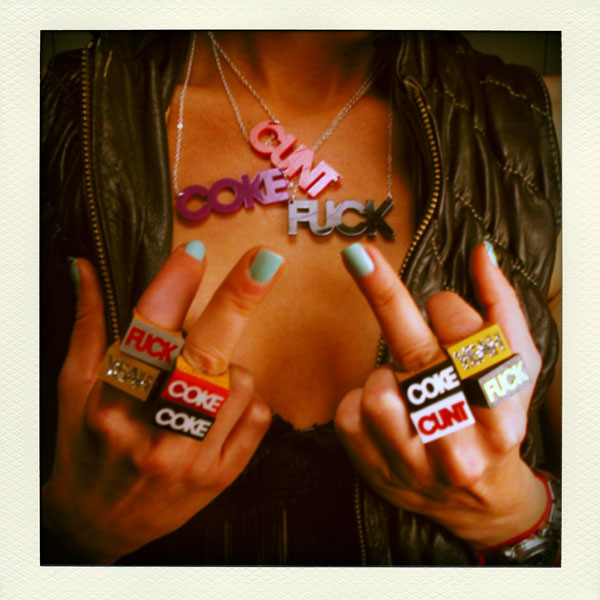 Listen up, all you lovers and fuckers. I’m pleased to announce the grand opening of my online boutique where I’m kicking things off with a NEIVZ + Coquette collaboration featuring my own collection of cooler-than-fuck handmade jewelry by one of my favorite Los Angeles artists and designers, Steven Shein.

Stop in to the Coquette Boutique and check out all my ridiculous bling. If something catches your eye, snatch it up quick. These pieces are all limited edition, and they’re only available through the site.

Oh, and of course, this is all just the beginning, so bookmark my shit and come back often. I think you’ll like where this goes.

The Lake Shrine Temple is one of those secret spots where I’ve done a lot of thinking over the years, and since today was Ash Wednesday, I decided to drive up to Malibu and visit Mahatma Gandhi’s ashes.

No, I’m not joking, and if you think I’m being irreverent, then you’re missing the point.

You don’t need religion to be spiritual, bitches.

According to the Village Voice, @coketweet is number three.

Remember when you were a kid, no impulse control whatsoever, unable to resist even the slightest temptation to fuck shit up?

Remember the first time in your life you got your grubby little hands on the volume knob of a gut-thumping stereo as it blasted your favorite dance song?

Remember how you thought that by jerking that volume knob along with the beat you were somehow imparting your own whomping thrust into the rhythm of the music?

“Charlie Sheen is an entertainer, and this is the first time he’s done his job in decades.“

— My answer when asked what I think of Charlie Sheen.

So I’ve been loving this song for a few days now, and I thought I’d share it. I heard Mellencamp sing it the other weekend, and it got me. I’m kind of a sucker for ballads that manage to turn a rear view mirror on life without being drippingly sentimental.

Besides, this shit was so good live. Seriously, it was gorgeous. That’s no surprise, really. A man doesn’t make twenty-five albums without having something worth saying about the human condition, and Radio City Music Hall was the perfect room to hear a legend like John Mellencamp hurl out every last ounce of his soul.

In all my trips to New York, I’d never been to Radio City. Lemme tell ya, that joint was a candy store for an architecture whore like me. Art Deco was dripping out of every nook and cranny. My friends think I’m crazy, but I still haven’t stopped talking about the original foot pedal hand dryers in the woman’s lounge.

It was a New York crowd, a lot of industry types and hipsters pretending to be there ironically. There were only a few hardcore fans scattered throughout the hall, and to their credit, they were the ones doing their level best to swill beer like it was a fairground in Bloomington.

There wasn’t an opening act. Instead, they screened “It’s About You,” a documentary about John shot entirely on Super 8 film that set the gritty, foot-tapping tone for the music we were about to hear.

The band was a well-greased machine. Bacon grease, with a side of hot damn. You could tell they’ve been jamming together for decades, and it was hard not to be impressed by the general badassery of Miriam Sturm, the fiddle playing Tinkerbell who zigged and zagged around the stage rocking the fuck out.

Naturally, Mellencamp owned the room. Dude sang with perfect pitch, and even though his voice sounded like he gargles with charcoal briquettes, it all still came out sounding like honey.

Some things are just timeless, ya know?

Facebook just broke up with me in an email. No joke. At first, I thought it was spam: “Hi, your personal account was recently disabled by Facebook.”

Turns out, they really do send corporate fortune cookie emails upon summarily detaching you from the matrix and shitting you out of the machine world.

Not that they asked me first, but apparently, they don’t believe that my real name is Coke Talk. What a shame, because that’s a violation of their ridiculous credo:

“Facebook is built around real world interactions. Operating under an alias detracts from the value of the system as a whole. Users who operate under fake names are also prone to abuse. We take this standard very seriously and remove fake accounts as we become aware of them.”

Honestly, good riddance. I’ve always loathed Facebook. There was a time when it was a necessary evil, but not anymore. This bullshit is my official tipping point. I’ve had enough of Zuckerberg’s hideous blue and white monster. I’m out.

I encourage every last one of you who know what I’m talking about to join me. If you’ve ever considered brushing aside that tangled web of bullshit, deactivate your account as well.

Start the trend. I promise, you won’t regret it. Fuck ‘em where they live.

Facebook has been little more than an irrelevant intrusion for the last couple years anyway, and now that it’s blown its mythological load with the big movie, I officially declare Facebook to be done and done.

Mark my words, The Social Network is gonna sweep the Academy Awards next weekend. That will represent Facebook sucking its last remaining drops of cultural significance out of the zeitgeist. It’s all downhill after the Oscars.

In the meantime, I’ve got much better ways to play around on the internet.

I love this so much. Nothing makes me happier than offending people who use frowny face emoticons.